Kemptville Campus' tenant, Proteins Easy, highlights the power behind biotechnology and how it could be used to help crop yields. This blog breaks down how it can be done, the benefits, and the repercussions!

Tune in to any Netflix forensic crime series and you’ll hear the phrase “person of interest”.

If you get to witness pure molecular biology while in the Kemptville Campus greenhouse, and find yourself discussing sustainable agriculture, you can drop the phrase “protein of interest”. (Now you’re at the cutting edge of innovation. You can thank us later.)

Proteins of interest are the focus and heartbeat of exciting biochemical research being done by Dr. Illimar Altosaar, the founder and president of Proteins Easy. His lifelong career as a biochemist, researcher and Professor of Biochemistry, Microbiology & Immunology at the University of Ottawa took an interesting turn into the world of entrepreneurs when his research yielded a new biochemical process that makes it possible to produce pharmaceutical proteins. These proteins, created in his labs, will have far-reaching positive implications for food production for the world and in creating easier and inexpensive access to vaccines.

The way that this process works? Instead of forcing a chemical reaction in an external process (like a lab or biochemical factory), Altosaar’s process uses the actual grain of rice as the internal location of the chemical reaction.

“We use rice as the factory—the rice seed is our bioreactor,” he explains. 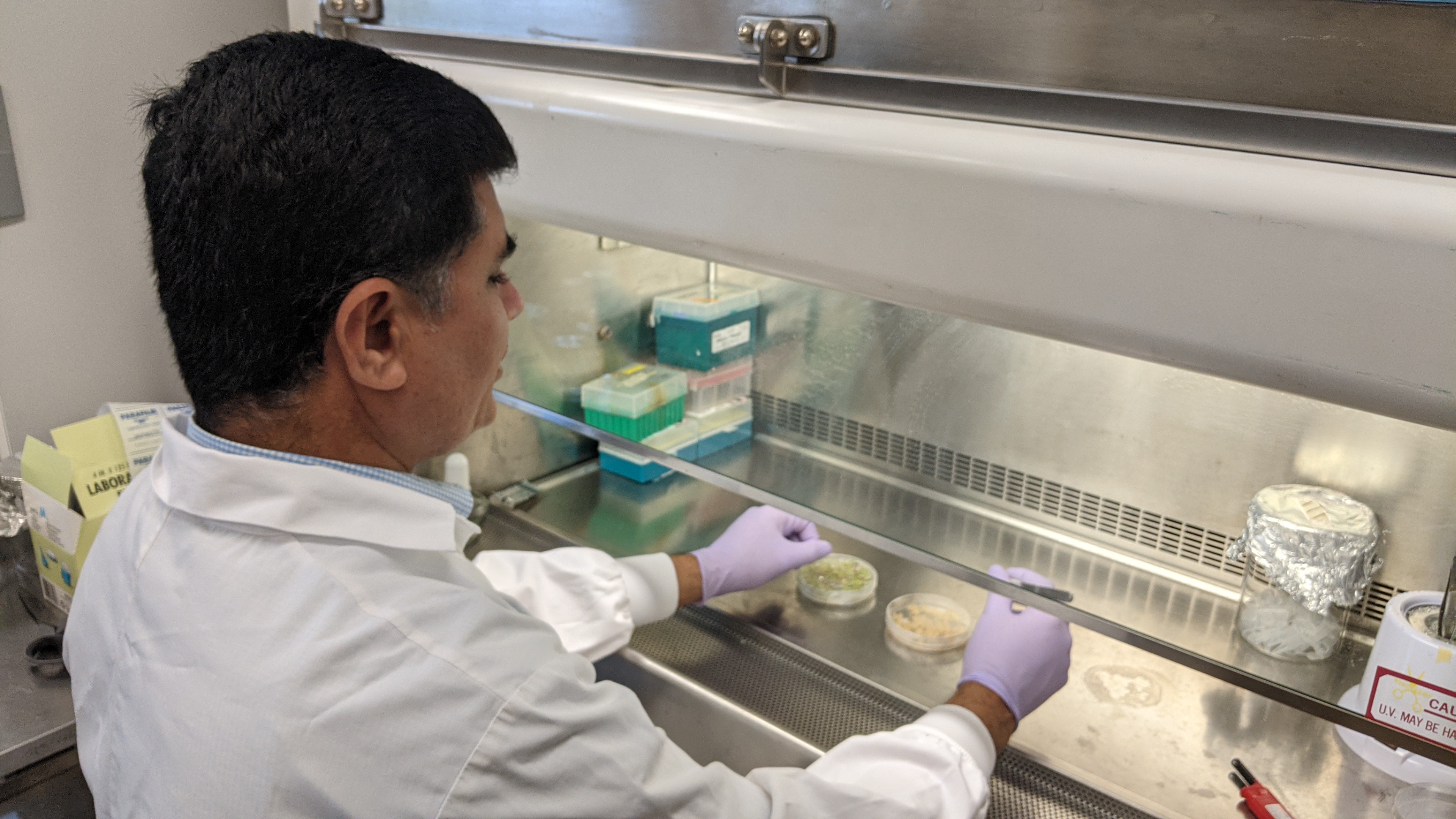 Dr. Altosaar is travelling speaking with heads of corporations, investors, and other scientists to lay out the possibilities. As he explains it, “the world is full of billions of proteins. You’ve got to get a production process, using plants, and our invention is to tag or tether onto the starch granule.” It’s rice biotechnology.

Dr. Altosaar’s specific invention uses a wheat protein to create the reaction. “What we discovered is that in plants, and especially in seeds, you have these “sinkers” that we use, to tether your protein of interest to the starch granule.”

And by protein of interest, he means “choose your protein” – a testimony to the adaptability and flexible applications of his patented process: rice, wheat, corn, vaccines, and others.

Early in his career, Dr. Altosaar was inspired by, and applied for funding from, the John D. Rockefeller Foundation. Its mission, as articulated a long time ago during the food shortages that swept the world during the Great Depression, is to end world hunger. The Rockefeller funding, which the University of Ottawa biochemical research team received from 1991 to 2006, couldn’t have found a more relevant vein of research to pump funding into.

Because of the experiences of his early life, John Rockefeller “made it his devout mission to solve world hunger, and that foundation was to keep the science and funding away from the army, the military and American government,” says Dr. Altosaar. “Rockefeller created his tax free foundation (built on the fortune he made revolutionizing the oil and petroleum industry) to help the small plot farmer in any country. So it’s an agricultural foundation,” Altosaar explains. 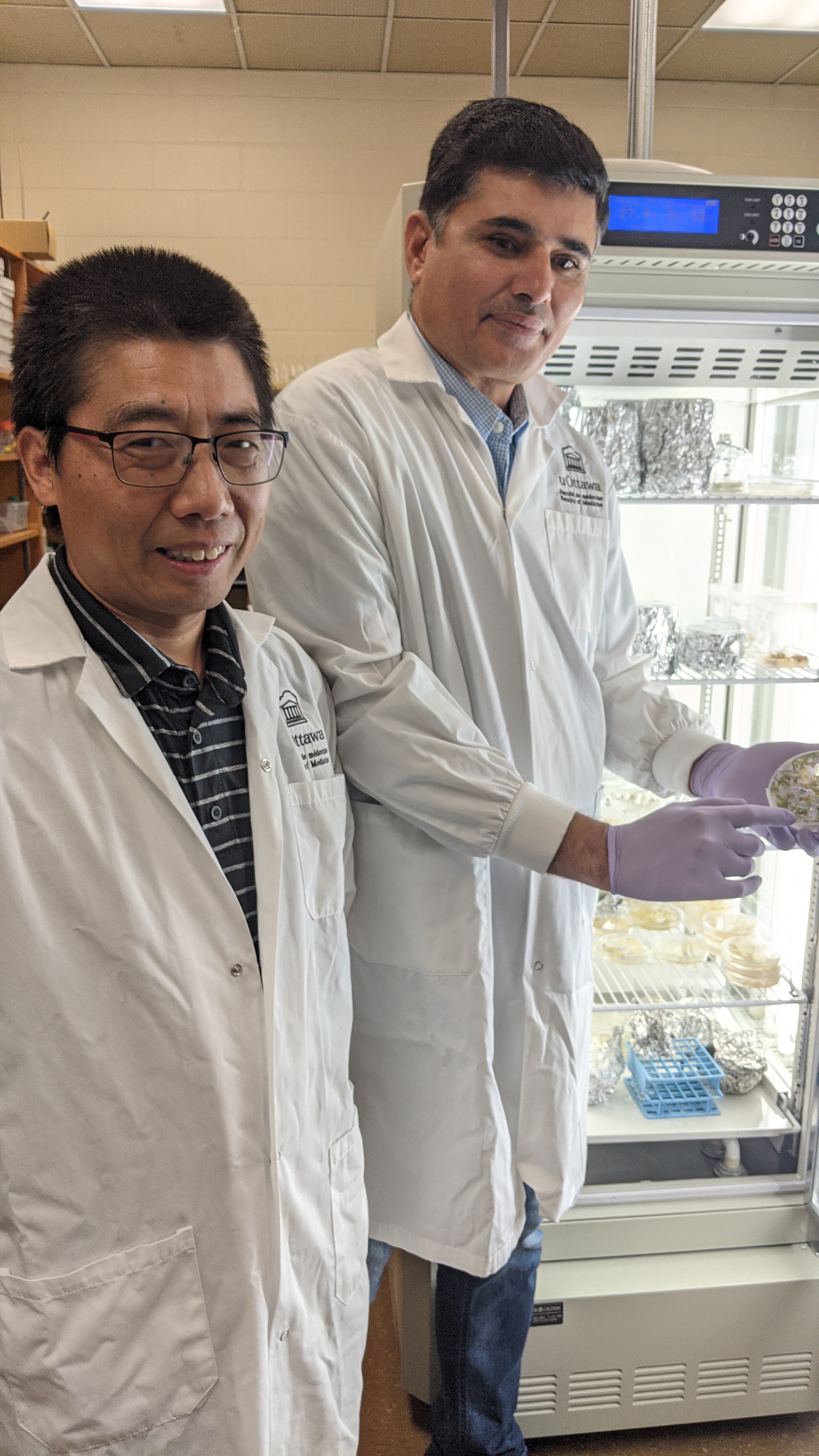 Biologists Tauqeer Ahmad and Weiya Xue conduct research at the Proteins Easy research facility on the Kemptville Campus, using the greenhouse to cultivate their genetically modified, high-yield rice plants.And, after understanding why the Rockefeller Foundation gives research money to scientists in countries around the world, you can draw a line linking that Rockefeller philosophy to Proteins Easy and their lab on the Kemptville Campus.

It’s with pride and almost a hint of disbelief in his voice that Dr. Altosaar explains, “by using this process with just one protein, Bt, in rice, or wheat, it would add 15% yield. Fifteen percent!”

Altosaar credits the foundational work of scientists in the EU and U.S. such as Mark van Montague, Dupont, Curtis and Cardinal. They made a foundation for his future discoveries, by succeeding in creating immunization proteins in plants. Altosaar first heard of this in 1985 while attending a conference about Plant Molecular Biology. “These are immunizations, where, for example, you’re taking the toxin of salmonella and putting into a food plant, and you eat it to immunize yourself against salmonella,” he says.

The ultimate applications? Like Rockefeller, Dr. Altosaar wishes to solve world hunger, and to put immunizing proteins into our foods, to make edible plants the carrier of vaccines.

Since January of 2021 when Proteins Easy moved to the Kemptville Campus, the facilities he uses here are helping Dr. Altosaar and his colleagues do what they want to do. Altosaar says that having a proper greenhouse complex and one square mile of actual land has been incredibly positive.

“It’s the right canvas on which to stimulate the young scientists who work for me, to point to that open field and the message to young scientists, they see it as, wow we can actually grow here.”

Despite the great facilities that Proteins Easy work in, they have a problem in that there’s a serious lack of rental housing in North Grenville. In fact, incredibly, “The housing crunch is the Number One problem for us. I need rental housing now,” says Altosaar, “for the scientists, for the people who we need to work in such a world-class facility. They need a place to live!” 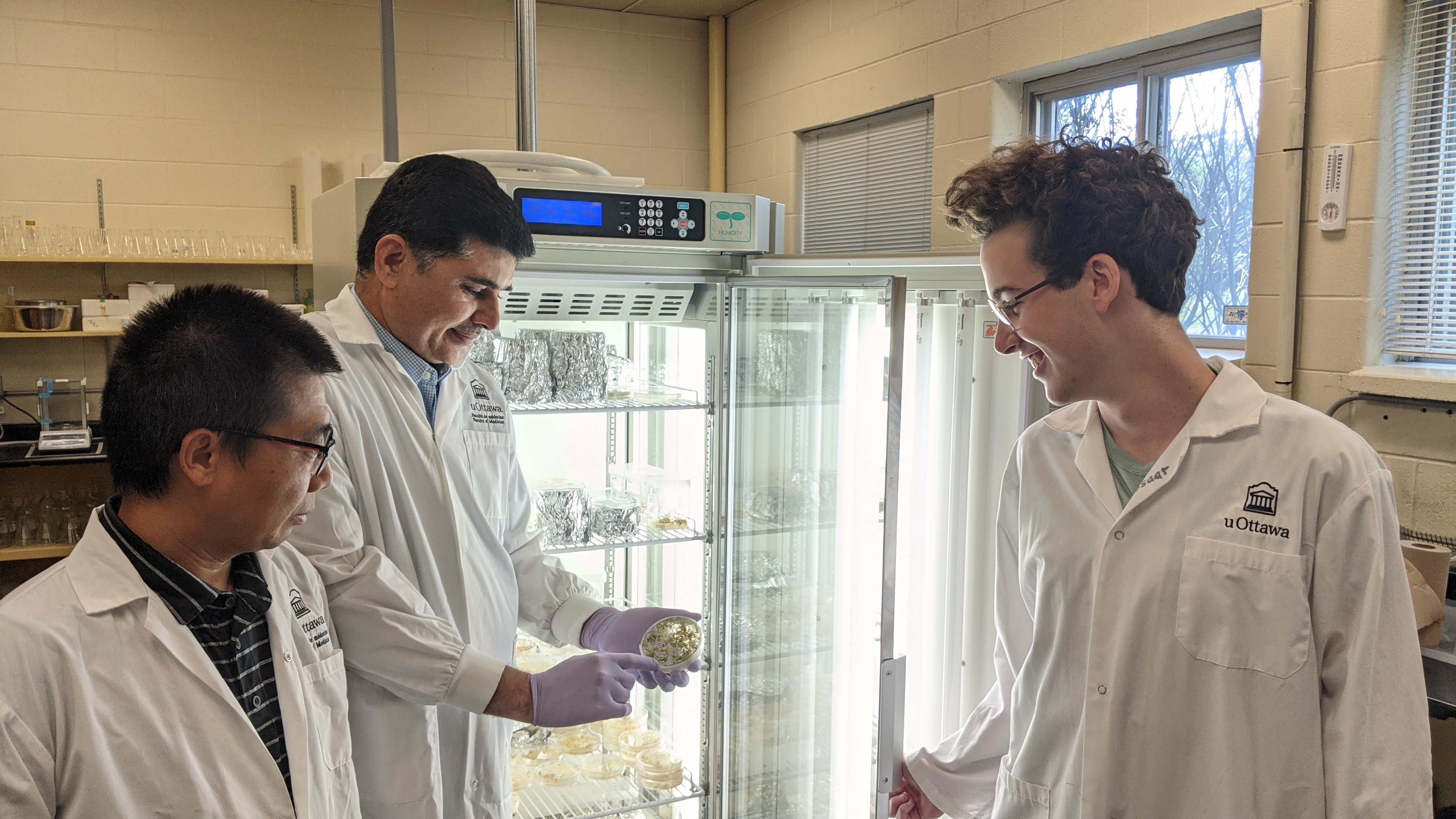 Like the scope of John D. Rockefeller’s vision and century of research funding, Altosaar points out that science is international, not national... and that he needs, and has, world talent for it. “This summer, a scientist from Penn State is coming to work. He’s going to drive up and he’ll get a work permit, and I’m spending most of my time on housing him, and red tape,” he says.

Another scientist is renting a room in Mountain, 14 kilometres away. Altosaar says the researchers would love to live closer, even some in downtown Kemptville. Wouldn’t it be perfect if the international guest scientists could walk to the campus?

“How can we grow if we don’t have an entrepreneurial infrastructure?” he asks. It’s a challenge he’s hoping he and others can find solutions to, this year.